Having traveled this route through West Africa, I am lucky enough to have visited all eleven countries on the coast from Dakar to Lagos.

Using my Top 10 destinations in South East Asia as a template, I will using the following criteria.

These places/countries are judged on:

So here they are…

I’ts got an alright beach with lazy cows.

Meeting random cows on the road and the Beach. Enjoying fresh fish by the sea where you effectively rent the whole restaurant. The atmosphere is enhanced when the owners come out with the Djembe drums.

Many hotels have pools and you’re not far from the beach. Smoke is easily available, albeit overpriced considering the area is touristy by WA standards.

A decent gaggle of friendly girls around at night. Most speak French.

Bottom Line: The best that Senegal has to offer, but that’s ain’t saying much.

Sugar mammies are everywhere in Gambia

In a word: Simple.

I’ts got a pretty good beach and a laid back village feel.

Checking out all the old grannies getting stuck in the young local guys… Hilarious.

Hammocks, beach, weed everywhere – not a bad spot for chilling.

Good Restaurants and wild nightlife (but only one or two options). Check out my Gambian Coast guide for info.

Party most nights with a good few girls about at night. They come from all over the region and nearly all speak English.

Bottom Line: Better than Senegal, but local guys can be pretty bothersome. 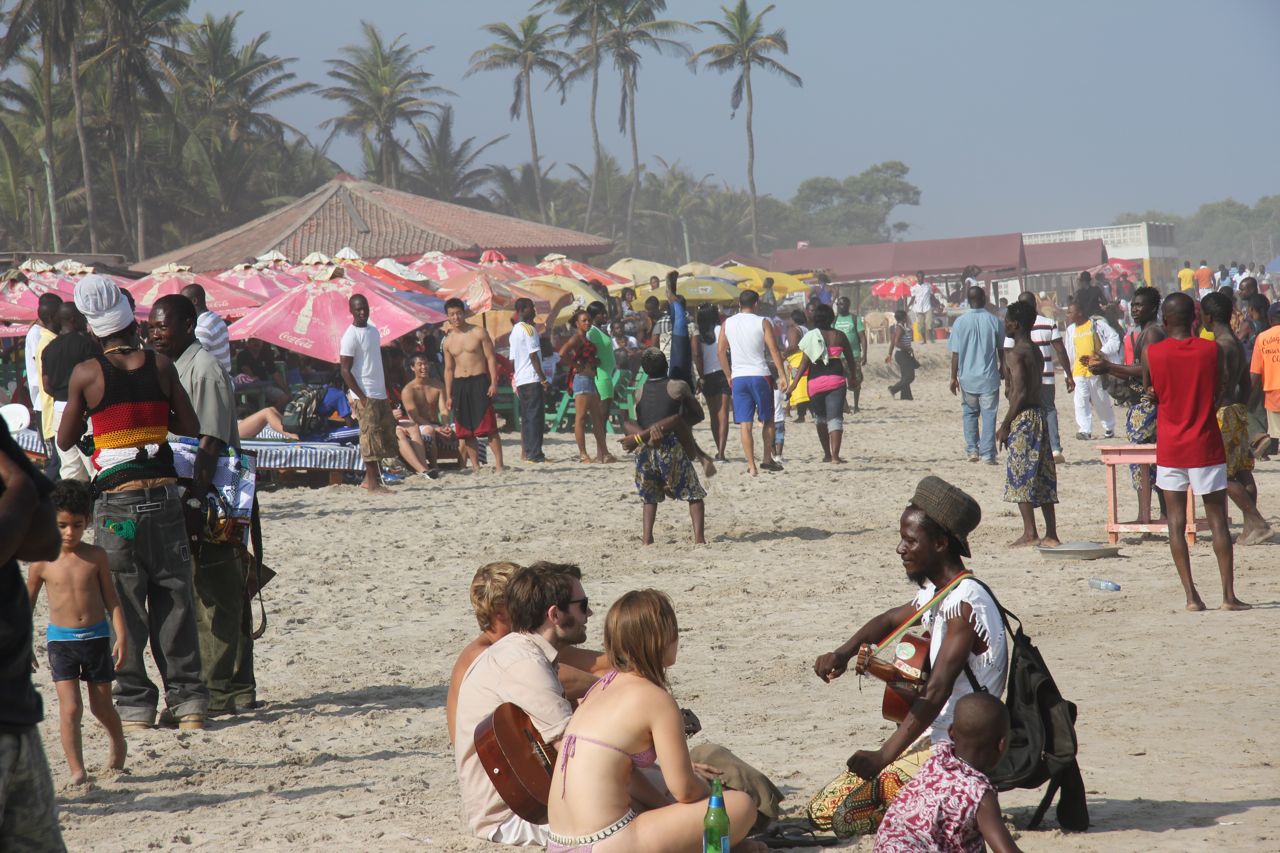 In a word: Slick.

Smoke Sheesha and check out a beach concert.

There’s lots of people around but your still by the beach drinking, it’s hard not to relax.

Plenty of people having fun partying. After sundown it sedates but during this is probably the best spot for partying during the day in WA.

Loads of sexy chicks from all parts of the world strutting around in bikinis. This is the best place in Ghana to pick up. 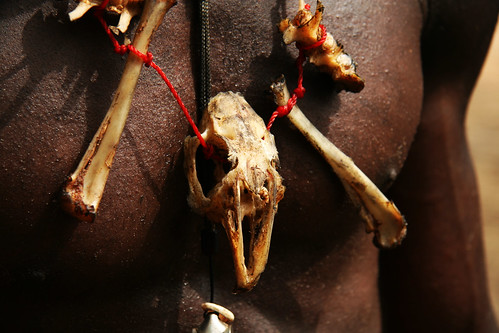 This is Voodoo country

The eco-tours there are excellent. You will learn traditional fishing methods and you learn all about voodoo. If you’re really lucky (as we were), you get to witness a voodoo sacrafice.

A 5 star set up with no tourists. Smoke available. Grab a beer lakeside and enjoy. The lake is the perfect getaway from the capital Cotonou.

Not much going on, but at weekend’s there is a local disco.

A lot women walk around topless, but are conservative in every other respect. Wasn’t there on the weekend but I’d imagine you’d try to be sold someone’s cousin. Not a place to pick up chicks.

Bottom Line: For me, West Africa’s ultimate chill out spot.

In a word: Pleasent.

Learn about coffee & coca plantations on a guided tour exploring the area around beautiful Kpalimé. The guides are great too.

Lomé is West Africa’s most chilled capital. Kpalimé got some nice waterfalls if you willing to trek to see them.

Lome has a laid back vibe but it hosts West’s Africa’s biggest nightclub! Check out the Lomé city guide to get a better feel for the nightlife.

A few nationalities about. Not the easiest place to pick up but still very doable. VIP Privé club has some fine women.

Bottom Line: A breath of fresh air on the road from Accra to Lagos.

Not great as beach isn’t up to much and apparently quite dangerous.

Having girls call to your door late at night for threesomes. Before they rob you that is…

City isn’t so hectic. Roof toop bars are the best places for unwinding.

Liberia by night is truly an adventure. Check out my Monrovia City Guide for more info.

Girls in Liberia love to f**k. I never had to refuse so much sex in my life as I did here. The only problem is knowing who to trust. But dam, Liberian girls are a little addictive. Hence the high ranking.

In a word: Chaos.

Nada. Although Victoria Island has some nice parts.

Some the world’s worst traffic and daily dealings with bribery and corruption.

There’s weed around, but not much places to chill.

The craic in Lagos in unrivaled. The place is exhilarating. Probably the wildest nightlife in West Africa. Plenty of options with cheap beer and live music.

Arguably the best looking (and friendliest) girls in Africa. You’ll understand if you read my Lagos City Guide. 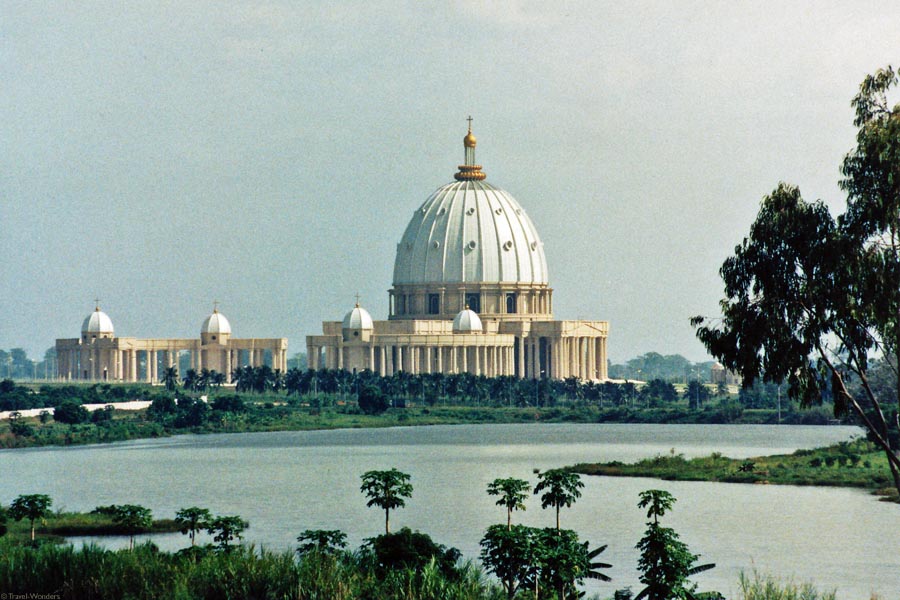 In a word: Magnifique!

Great jungles near Liberia and lagoon views in the streets of Abidjan.

Having the world’s biggest church all to yourself (I’m not religious but wow!). Enjoying the Marquai bars.

The capital is really laid back and it’s not hard to get your hand on weed from the Marquai bars.

Nightlife in Abidjan is mega. Biking from the Liberian border is also an epic jungle trail.

Bottom Line: For many who visit the region, this is their favorite country in West Africa.

In a word: Unexpected.

With many of the region main rivers originating in the Fouta Djallon, this place is filled with mountains and waterfalls. For me, the most beautiful country in the region. Beaches in the capital.

The Journey from hell. Ultimate jungle treks. Having to put on hoody because the chill in the mountain air (a welcome temperature change).

Taking a swim over a waterfall. Weed is abundant. Very chilled. Even in the capital you can find quiet moments by the beach.

Conakry has a pretty decent nightlife and displays great variety. The beach parties are a blast too.

The Fula girls are gorgeous. English isn’t that prevalent but with a little French you can bag yourself a hottie.

Bottom Line: Reminded me of Ethiopia… my favourite country in West Africa.

In a word: Heaven?

Being able to smoke joints in nightclubs.

Beach bars with hookahs? Aberdeen is the ultimate chill out spot. Everyone smokes and it’s not problem in some restaurants even. You can even buy joints in clubs.

Wild nights, every night. Options are limited, but the venues are Grade A. Beers are cheap too. Freetownians really know how to have a good time. Check out my Freetown city guide for more info.

It’s very easy to pick up in Freetown 5/5. Only Monrovia is easier. You can find some real gems here as well. There’s also Lebanese and other expats for the taking.

I decided to only include places I’ve actually been in the top 10. As such, the list above only covers countries on the coast from Dakar to Lagos. I contacted some fellow globe-trotters to give their top 10 on the route as well. Here are some other picks from fellow travellers…

Check out my my West African City Guides!

Summer Lovin’ in Dublin
Edinburgh: A Hatrick of Limericks