I jerked back feeling the sting of the whip.

I tried to free my hands from behind my back, but I was blindfolded and handcuffed to Eric, with his long black pole sliding between my butt cheeks. I tried to beg them to stop, but with the gag ball in my mouth, all I could do was drool on my chest…where metal clamps dangled from my aching nipples.

“Your turn,” said Jen, passing the flogger to Anna, “Make him suffer!”

Ahh! This wasn’t what I signed up for when the four of us got in the taxi! It had started off so promisingly…

Myself, Eric, and Anna were having a pint at a dive bar on the Upper West Side. I’d been seeing Anna for a while. She was a stereotypical-looking Russian—tall, slim, blond hair—the kind of girl that commanded attention. We had what most guys would call ‘an ideal relationship’. She let me sleep with whomever I wanted, but she only had sex with me.

“I only want you. I’m not a slut,” she told me, “but I understand men want other girls. It’s natural.”

Anna was like a pet. On more than one occasion, I put a collar on her and took her outside on a leash. I’d walk her around Manhattan and even go to fancy restaurants and high-end clubs in such fashion. Everybody stared; men smiled and women scoffed. (Oddly, dog walkers always had the strongest reaction, and sometimes even the dogs themselves looked at us sideways.)

I nodded my head, but suspected she’d change her mind. Jen made a full-time income as a glamour model and most people found her very fuckable. She had some concerning mental issues, but she was down for anything (she’d even taken me to a nude mascaraed party a few weeks previous).

“Hi! You must be Anna,” Jen chirped when she arrived.

“Nice to meet you….and this is Eric,” said Anna, pointing to her right.

“Eric is our lamp,” I explained jokingly. “Anna is moving switching apartments and offered him to me. He’s super boring and just stands there, but he’s a good guy with a lot of bright ideas.”

Oh, did I not mention that in the opening paragraph? —That Eric was actually a lampshade? I probably threw you off there; sorry about that. I know my haters would have loved to see me raped by some Mandingo, but it didn’t quite pan out that way.

Several whiskey shots later, Anna was far more agreeable, and pretty soon the three of us were in a taxi back to my place.

That’s when they tied me up.

Red from the whip, the blindfold came off and the two girls stripped each other down. The whole torture thing had made my cock shrivel like a dried prune, but when the two of them got on their knees I had an insta-boner. They began stroking my hardened shaft, Jen suckling my balls and Anna wetly licking the bottom of my cock as they both starred up into my eyes.

They stopped and laid on bed my bed, making me watch as they sucked each other’s tits. I couldn’t take it anymore, and with super human strength I broke free and released my inner caveman.

I flipped Anna over on her belly and threw Jen on top of her: their two plump little butts presented to me with wet pussies waiting to be pumped. I tortured them for a while, slapping those cheeks and savoring the power, then I fucked those holes like an excited child running up and down the stairs of a double-decker bus.

I think I should end that story there—on a high. I could tell you about the tears and jealous bullshit that followed, but that peals away at the veneer of awesomeness. I came: that’s all that’s important.

Welcome to New York, by the way. 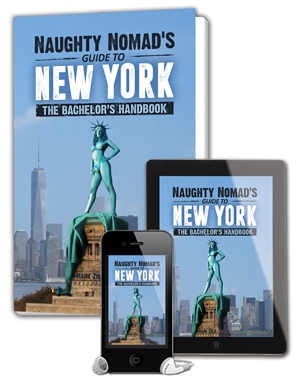 Neil Strauss Picks Up My New Book! (w/pics)
The Best Neighborhoods for Single Men in NYC: The Stats