Kingston in a word: Tough.

Kingston was my favourite place in Jamaica. You don’t get hassled as much as the coast, you can find hot girls, and the nightlife is exceptional. That said, people aren’t very warm, logistics are a nightmare, and some parts of the city are pretty rough.

Appearance: As I mentioned before in my Jamaican Coast Guide, Jamaican girls, in general, are disappointing compared to their counterparts across the water in Africa. Fat is considered sexy for many Jamaican men, so expect to see many “fluffy” heifers about. Despite that, after going to the right night spots in Kingston, you can really find some gems. Some of the upper classes and mixed raced locals are smoking hot. They are not in abundance, but they exist.  The average female height 1.608 m (5 ft 3 1⁄2 in), although a lot of the good looking stock tend to b emuch taller.

Demographics: The vast majority of the population of Kingston is of African descent, mostly descended from the Akans (think Ghana) and the Igbo (warrior Nigerian tribe) in West Africa. Large minority ethnic groups include East Indians and Chinese. You also see a lot of Japanese and European tourists about.

Attitudes: Jamaican girls are not as friendly as others in the Caribbean. Ghetto chicks see you as walking dollar sign, but you’ll find  genuine friendliness from the middle and upper classes. Girls in this group are surprisingly approachable.

Gaming Strategy: Patwa is the de facto language on the street, but everybody speaks English. Night game and pipelining are your best chance at meeting a top quality girl. Guys here are direct, so a more subtle approach serves well. As a foreigner, you’re a little more exotic than on the coast, but it doesn’t offer any significant advantage. You can get numbers are attraction easy enough, but your biggest problem are logistics. Few accommodation allow guests. Unless you shell out for an apartment, you’re going to struggle. The only alternative is a “fuckshop”, a short-term love hotel primarily for prostitution. But don’t expect any girl worth her salt to jump at the idea.

Accommodation: The area you want to stay in is uptown Kingston. It’s safe and has nightlife. For apartments check out AirBnb. Aside from that options are quite limited. Anywhere north or east of Half Way Tree station isn’t a bad option. If you’re traveling solo or on a budget, I highly recommend you stay in Reggae Hostel. You can’t bring girls back, but the owner and staff are great, as is the location. It has a bar, cool people, and they even arrange nights out.

Getting High: You’re in Jamaica. Do you really need to ask me this? Don’t overpay. $10 should get you more than you could smoke. For more information, check out this webehigh article.

Kingston nightlife is dynamic, adsorbing, and constantly evolving. The live music scene is also kickin’. However, it’s spread out. Don’t leave town without checking out a sound system /street party. Shit gets crazy. It the no.1 thing I recommend you do in Jamaica. Aside from that, where to go depends on the night. Random parties spring up in random places. Ask around. I can only speak from my experience. Kingston is a weekend town, but you can party 7 nights a week.

Weekend: The Quad is old news, but still worth a look. Asylum and Privilege are the new hot spots for clubbing, the former being the no.1 pick.

Sunday nights: Take a taxi high into the mountains and experience Dub Club. It’s essentially a massive house party with a sound system and a bar in somebody’s kitchen. The view is amazing. There are some nice middle class chicks around and the mix is good. Go early. By the 2AM it’s dead. 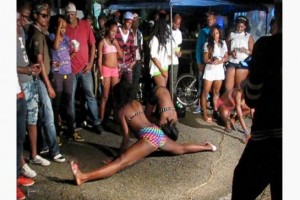 Hot Tuesdays: is a biggest street party in town Tuesday night. It’s a nice part of town, so unlike other street parties, there is a $10 cover. This is good because it keeps out the rift-raff.

Wednesday, check out Weddy Weddy Wednesdays in Uptown Kingston and Passa Passa (the largest street party in the city).

I also you recommend find out if there are any college parties are going on. UTECH in Pepine do student nights with cheap drink and are buzzing with middle/upper class girls. When I visited there were people handing out flyers.

Although the city and it’s people didn’t exactly charm me, the diversity of Kingston’s nightlife certainly did. I spent five days there, but I would have liked to stay in the city longer to experience all it has to offer. I found it easier to pick up genuine girls here then other parts of the country, but it wasn’t easy. I got my Jai flag in Mo Bay, but in the capital my logistics made things almost impossible. Would I go back? Perhaps, but I wouldn’t be in a rush. The coolest thing I did in Kingston was go to house party of one of Bob Marley’s former guitarist. He gave me some strong shit. Respect, mon!

Chantel, a cute 20-year-old student, had this to say…

Your typical Jamaican girl is very jealous, miserable, fashionable, and they like men with money. They likes to fight and are always smiling. Advice: If she’s genuine you’ll know based on how she talks to you. Most Jamaican girls like foreign men and they get craving after a time, so if u meet a girl here and she doesn’t crave for what you have then you can continue date her, but if u see that she wants to bring her friends to meet ups and always asking for things, avoid her. As for dating, men here don’t really take women on dates like foreigners. It’s more casual. You just show up at the same place or go to a park or something.

For more info on Jamaica, or if you have any questions, check out the links below or leave a comment.

The Jamaica Thread  on the Forum