Yerevan in a word: Passable.

Yerevan is no match for the grandeur of its rivals Tbilisi and Baku, but it still has its charms. A walk around Opera Square and a trek up Cascade and Freedom Park in the evening will leave you with a favorable impression of the city—which still outclasses most ex-soviet capitals. Regardless, the main appeal of the city is its laid back vibe. It was the only city in the Caucasus where I’d consider living for a month or two. 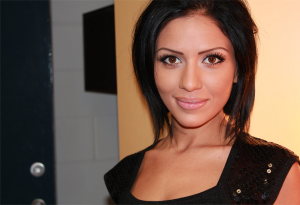 Appearance: I expected Armenians to be quite homogeneous in looks, but nothing could be further from the truth. The Armenian tribe is similar to the Jewish tribe… they got displaced, became diverse and diluted, and their diaspora kinda came from everywhere once the state was formed. As such, the standard deviation in attractiveness is greater than anywhere in the Caucasus. I saw more world classes stunners here, but I also saw more fatties. It was the only country I saw American-style obese women and Slavic model-types walking down the same street. That said, there are still some common features. Similar to Azeris, the vast majority of the population have black hair (around 75&, often curly), dark eyes and prominent angular noses. Bizarrely, there are also some natural blonde hair/blue eyed Armenians, too. Their average height is 158cm (5 ft 2 in). That stat is kinda deceptive, however, as they have the tallest girls and guys we saw in the region (back to the deviation I was talking about).

If you go to the right spots, you will see some of the sexiest girls you’ve seen in your life. Armenians dress more feminine than Georgians, but less so than Azeris. Girls are quite image conscience and take care of their appearance. A top drawer Armenian in the cream of the region.

Demographics: 98% percent of Yerevan are described as ethnic Armenia, while a few thousand Russian, Iranian and other groups account for the rest .

Attitudes: Armenia is the oldest Christian country in the world and people are still very traditional (by European standards, at least). Indubitably, Armenian girls are the most conservative of all Caucasian Christians and are much more sexually reserved than any of their eastern European counterparts. The average age to get married in 24 and it is estimated somewhere between 60% to 80% of Armenian girls are still virgins when they marry. Interestingly, I had more naked Armenians in my bed than any other nationality in the region, but going from foreplay to intercourse was like scaling Mount Ararat. It’s like Armenian chicks have electric buzzers in their vaginas that go off every time they sense a snake in their mists.  A lot of investment is required to nail them down. If you do, prepare for a lot of attention.  The good news is Armenians are very affectionate, feminine and the perfect blend of sexy versus romantic. I’m not the marrying kind, but if I was, an Armenian woman would be top of my list.

Gaming Strategy: The prime day location to pick up is around Opera square, where many girls hang out on the benches or swam lake. Unlike its counterparts Baku and Tbilisi, nightlife here is actually a good (if not the best) option to meet single ‘liberal’ girls. Unlike Azeris, many Armenian girls drink in bars. You’ll still need to work though. That means a few meet-ups (with you paying the bill) and a lot of comfort building. Yerevan is also one of the worst capital cities I’ve been to for ‘big village’ syndrome. For example: On a walk to the park with one of my dates, she got stopped three times by people she knew. The next day I even had a previous girl I dated bump into us. It was terrible awkward and really fucked shit up. So the lesson here is be discreet. Scope out a quite bar near your apartment and minimise time in public. The good news is that English is more prevalent here than Georgia and Azerbaijan! It was a welcome relief from spitting my bad Russian.

Accommodation: I’ll keep it simple: stay somewhere near Opera Square, preferably between there and Pushkin Street (a good bar street). We stayed at a great place off Pushkin for $35 a night, right by our favourite bar. Look no further than this site: Yerevan Apartments.

Getting High: Where to buy marijuana in Tbilisi: Ask the staff at Process basement bar of Moscow Street. Alternatively ask here.

Yerevan marijuana prices: Prices can vary greatly. Usually about $30 for a for a matchbox, but costs vary from around $20 – $40 max.

The nightlife scene in Yerevan was my favourite in the Caucasus – but that’s not saying much. You have a good variety of cool bars with decent music and a party atmosphere. Plus, pretty much everywhere is within walking distance. Here are my top picks.

Very cliquey, small and quiet, but a good place to bring a date and an easy place to make friends. (Not a place to party by any means.) 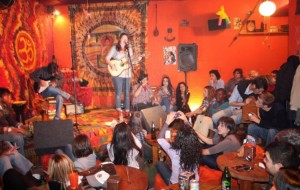 This little basement ethnic bar was probably my favourite bar in the whole region (provided it doesn’t get too packed). Good vibes, Asian decor, GREAT music (often live bands), laid back crowd, cheap beer, cool staff and lot’s a girls dancing. I had a blast here and kissed a few chicas, too. The quality isn’t always that high though. Pics and videos here. Sadly, this place is becoming a victim of it’s own success and get a little packed.

This bar may well have the highest standard of chicks for in any one place for a thousand miles. DAM! This reason for this? If you want to get in you’ll need a member’s card. To get a member’s card, you need to fill in an application form with photo attached. If you’re not hot or in the know, you’re not getting in. Luckily, as a foreigner you can blag your way in. We were luckily as we got on the guest list through a friend. Great bar, not too pretentious either, despite it’s exclusively. Dress sharp. Facebook here.

I really liked the city. When I hunting for the mother of my child later in life, I may well mine here. As for my experience with the girls, I actually went to bed with three girls in four days there, but I still don’t have a flag to show for it. I got half a dick in two of them momentarily (both virgins), but I’m not counting it. My only consolation is both girls gave me their first blow jobs (or so they say). One of them became a stalker and camped outside my room for hours on end, the other nearly moved to Ireland so we could be together, so I obviously made an impression. Oh, and funny enough, the third girl and I are actually meeting up next month in Ethiopia of all places. (She lives there and technically and Ethiopian flag though…I think). Random, eh? I love Armenian girls. Totally my type… dark, sexy and innocent.

EDIT: I recently made love to a sweet Armenian virgin.

Unfortunately, I don’t have refs from any male expats in the city, so I asked some Armenian girlfriends to share their thoughts.

Koh, 20, who spent a semester in the States gives her perspective.

Armenian girls being courted before actually going out on a date is an important thing. When it comes to dating, girls here choose the guy they date very carefully. Most of the times they won’t choose a guy they’re not serious about.

Pre-marital sex is a taboo. It’s socially condemned and even talking about it is not really acceptable.

Marriage and family are very important things for Armenian girls, we take it very seriously. While getting an education and earning your own living are important, family will always take first place. Armenian wives are typical house keepers. The divorce rate here is very low, and being divorced is also socially frowned upon.

I’d say 80-90% of my female friends strongly agree with the idea of no sex before marriage.

You can meet nice girls pretty much anywhere. Girls here are very friendly towards visitors, so if you politely approach someone they’ll most likely respond positively. Don’t be cheap. If you like the girl, then no matter what she says and how much she resists, always insist on paying for the bill and escorting her home [Zolo’s Comment: Don’t the mind the escort, but do offer to pay for drinks like other FSU countries].

Armenia is between the Eastern and Western mentality,  but with a bit more focus on the Western thinking and approaches than those of the oriental world. Things are changing. Currently, pre-marital sex is not such a rare thing for those who love each other and want to take up another step [barf], but virginity is still very common in Armenia before marriage.

Armenian girls are quite different from other European girls you might have met in a way, because apart from being quite hot:), we’re also quite caring wives and mums. I know many local girls marrying foreigners, but to get the trust of an Armenian girl is the hardest thing.

Other testimonials from pretty much every guy I talked to who has been there:

It’s fucking hard to hook up.

For more info or if you have any questions on Yerevan…

Armenian Brides: What you need to know.

Naughty New Year Resolutions 2013
Are you a Swagabond?