When it comes to good looking girls, liberal attitudes, and nightlife, Tunisia is the best country in North Africa. It’s also the smallest country in the region, making it easy to explore it’s main attractions on a short trip. That said, while it can be fun and there’s are a few cool things to see, as a travel destination it’s not nearly as memorable, likable, or impressive as Morocco (guide here).

Below I give my 10 day itinerary for the country, as some other travel ideas, and review the highlights. Due to terrorist attacks in 2015 tourism is suffering badly, which is good for sights, but bad for nightlife.

For a better feel of the country, check out this video I made showing the highlights of our trip: 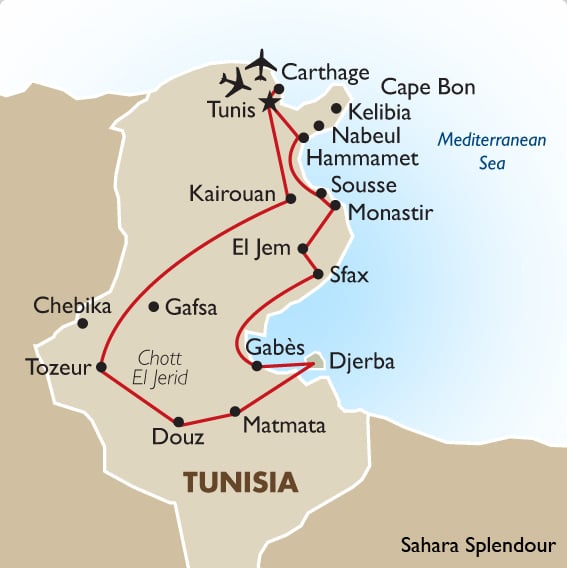 Recommended stop-offs for a 2 week trip

After a lot of research, here was the itinerary I made:

Places I didn’t get to visit, but wanted to:

Girls in Tunis are surprisingly light-skinned and European, but the farther south you go you’ll find darker shades and women of Berber descent. Overall, I thought Tunisian women were far more attractive than their counterparts in Egypt and Morocco.

Tunisian girls are also the most liberal in North Africa (although that’s not saying much). It’s similar to Lebanon or Armenia. Stick to the big cities if you want to pick up, because down in the country it’s almost impossible.

For more detailed information on Tunisian girl’s appearance, attitudes, and to find out how to pick them up, I strongly recommend my detailed Tunis City Guide.

I also recommend you learn French or Modern Standard Arabic before your trip.

Tunis was my favorite place in Tunisia, but only because the rest of the country felt a little of devoid of life and a little bit depressing. As mentioned above, check out Tunis City Guide for a full breakdown on the city.

Another major coastal city and considered very liberal. We were only here for one night, but it was easily the wildest night of the trip. Think MDMA and an ice bar! (Ask the bartenders at your hotel for “locos”). We even found an after-hours venues with live music that didn’t finish up until after 6AM!

Ice bar in Sousse, Tunisia. Before the MDMA kicks in 🙂

We started off the night at Igloo Ice bar. It was  housed in our hotel and quite reasonable for the experience. We then spent most of the night in the club at Gold brau. We had a blast here. Lots of nice women, great DJs, but a bad place for solo guys. There were too many groups and table service. We then finished up a massive nightclub next door that was way better for mingling.  This place looked wild. However, none of us remember anything from there. I only saw some footage I took on my phone while wasted. You’d swear we were in Ibiza. Another venue recommended to us was Saloon, but they refused us entry because it was too late.

Like the rest of Tunisia, Tozeur and it’s surrounding sights were practically devoid of  tourists, but in this case that was a blessing. It felt like we had the place all to ourselves. Using the town of Tozuer as your base, in this area you’ll find three major oases and also the Star Wars film set for Tatooine. We rented a car and were able to visit all four locations in a single day trip without difficulty.  There are also tours available.

If you’re self-driving the three oasis are called Tamerza, Chebika, and Mides. Try to leave Chebika for last as it’s the most beautiful.

The Star Wars set is in the opposite direction to the oases at a place called Oung Jemel. This place is pretty cool and great for pictures. We choose to visit it after the oases near sunset.

Don’t go here. They had incredible hotels, restaurants, and nightclubs, but everywhere was deserted. It was the same with the airport. The only fun thing we did here was some quading and visit the local market. I’m sure things with get better in a few years, but right now as of 2017, it’s a ghost island.

Why not check out more men’s travel guides?

For more info on Tunisia or if you have any questions, check out the links below or leave a comment.

There’s also a Tunisia Discussion Thread on the forum.

9 day itinerary for Tunisia by Travelonthedollar.com (This was my inspiration for the trip)

WATCH: The Siege of Serbia!
How I Made A 37% Return in 14 weeks By Milking a Ponzi Scheme

2 Responses to The Men’s Guide to Tunisia (Including Video)