Tbilisi in a word: Purty.

Tbilisi surprises you. Ancient monasteries perched alongside the mountainside overlook futuristic new buildings. Take a stroll around old town, the river and by the fountains at Europe park and you’ll fall in love with the place. Make sure you get a cable car over the city, too. Great girls, but not easy. Nightlife is shit.

Appearance: There is definitely a distinctive Georgian look. A clue to their unique ethnography is evident in the Georgian language, which is neither Indo-European, Turkic nor Semitic. The typical Georgian girl has dark brown hair, slightly sallow skin (similar to Balkan women), exceedingly flat eyebrows and a small Asian-type body. Their average height is 156cm (5 ft 1 in), the smallest in the Caucasus. They are also the lightest. The average standard is probably highest in the Caucasus. However, while finding doable girls is easy, but finding serious hotties is difficult. The frequency of jaw droppers is much higher in Azerbaijan and Armenia. Compared to these countries, the girls are also lighter in skin tone and hair colour.

Georgian girls are also the most Westernised of the lot. Converse shoes, tattoos and body piercings are no uncommon. A lot of the girls tend to dress quite hipster-ish, too. That said, Georgian girl are still more feminine in the way they walk and carry themselves.

Demographics: Tbilisi is a multicultural city (by regional standards). The city is home to more than 100 different ethnic groups. Around 85%+ of the population is ethnically Georgian, with significant populations of other ethnic groups such as Armenians (82,586), Russians (32,580), and Azeris. Along with the above mentioned groups, Tbilisi is also home to various other ethnic groups including Ossetians, Abkhazians, Ukrainians, Greeks, Germans, Jews, Estonians, Kurds, Assyrians, and others.

Attitudes: Georgian girls are most liberal girls in the region—but that’s not saying much. They are still more sexually reserved than any of their eastern European counterparts. The average age to get married in 23 and 20%+ of Georgian girls are still virgins when they marry. Coming from Sweden, girls in Tbilisi seemed liked nuns. Most girls take two or three dates to crack. One stands are very rare. Of all the expats I met, only two had managed to hook up with a local. I also had a friend living here for the whole summer and only managed to get a few kisses. All in all, I’d rate them harder to crack than Lebanese girls, but easier than Armenians.

Gaming Strategy: Options for night game are painfully limited. However, it’s still you’re best option. Day game is like marriage game. Simply put, the girls who go out at night are the only ones who put out. If she smokes, all the better. The good news is Georgian girls are very receptive to approaches, however, you may encounter a few problems.

Firstly, you have the less exotic capital here than anywhere in the Caucasus… especially as an American. In the last three years there has been a torrent of tourists and English teachers coming here. Secondly, many have limited English (hence the teachers). This is changing, but Russian is still the language of love here… like the rest of the Caucasus. Learn it. Thirdly, nearly all of them live with their parents and have curfews. Finally, they generally require work and investment. Don’t expect a one night stand. It rarely happens. You’re best bet is to build a vibe and get the number, and meet for a date at another time. Don’t be overly concerned about getting a kiss during the pick up. Many girls are shy with their friends around. All the  Caucasus capitals suffer from ‘big village’ syndrome.

Accommodation: You want to stay somewhere on Rustaveli street or Old Town. Personally, I opted for a place mid-way down Rustaveli near the nightlife venues below. BEWARE: Most hostels in Georgia do not allow locals to stay there. If you want to get laid, you have to rent apartment. Period. Unfortunately, apartments in Tbilisi are the more expensive than in Baku and Yerevan. If you ask at Why not hostel (great location and staff), they have the low down on a cheap apartment next door  ($35 a night). For other apartments, check out: Tbilisirent.ge, FeelTbilisi.com & rentals.ge.

Getting High: It is legal to have marijuana if it is under 2 grams.

Where to buy marijuana in Tbilisi: Ask anybody who looks like a smoker at Canudos or Salve .

Tbilisi marijuana prices: Prices can vary greatly. Usually about 50GEL ($30) for a for a matchbox, but costs vary from around $20 – $40 max.

The nightlife scene in Tbilisi is pretty terrible. In my opinion, it is the worst in the Caucasus. You basically have two options. One is Shardeni Street in Old town: Russian level pretension, expensive drinks, very coupley, older crowd. (I have limited experience of this area). Then there’s a few place off Rustaveli and Freedom square.

The following are not really recommendations, but more of a ‘most tolerable bars’ list.

I never recommend restaurants, but I’m making an exception. Start your night here. A slap up Georgian meal and a few draught beers end will cost you next to nothing and you even get to see a show… with the most talented belly dancers you’ll ever see. 38/40 Rustaveli Street.

Good basement bar place near Freedom square on Shalva Dadiani St 15.  Attract an indie type crowd. Not a good pick up place but a good place to warm up or bring a date.

Damn, I hate this place. Yet, sadly, this techno hipster gayfest is the often only gig in town- especially mid week.  The good news is it’s consistently busy (more than any bar), the beer is cheap and the women here are the most liberal in the city, so it’s good for scoring. Plus, many of the guys are gay so the competition is lessened. This is the only bar where I’ve heard of a guy getting a one night stand. It’s a pity, because this place would actually be OK if were not for the monotonous unrecognisable drivel being shit out by the DJs there. You’ll undoubtedly end up here at one point. 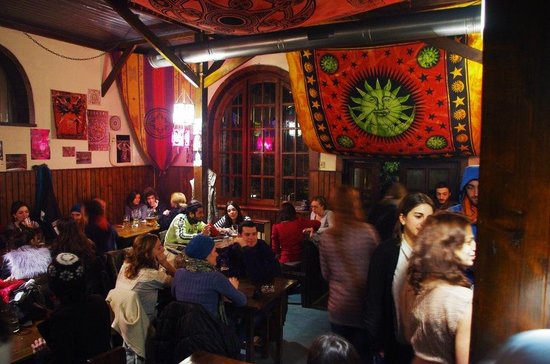 Five minutes walk from Café Gallery…a good place to start the night. As much as we tried to avoid it, we kept coming back here. This tiny little ethnic bar attracts  young ex-pats, Georgian students and hippie types. It can be hit or miss, but one thing that’s consistent is good music and cheap drinks. The layout is not very good for game though… lot’s of low seating with big groups. That said, girls here are receptive. This is where I picked up my Georgian flag. And if you can’t pick up a Georgian, at least there’s a few eager American TLG English teachers around. Facebook page here.

Tbilisi acted as our base in the Caucasus. I went with five friends, but that number dropped to two after a few days. In total, I spent about 8 nights here. I found it very difficult to pull. I struck out more times here than anywhere in the region. I went on dates with three different girls (2 from which I met online) and got the odd kiss in the likes of Café Gallery, but ultimately these interactions amounted to little. Conservative attitudes and bad logistics were the reasons for this. I was convinced I wouldn’t get the flag, but my last night I rented an apartment and pulled it off. It took a lot of patient and effort. She was a student I picked up in Canudos and it was my 3rd date with the girl. Totally worth the wait. She had the sexiest little body I’ve experienced in two years. I got lucky.

Patrick, 24, from Canada, who has live there for five months had this to say.

Georgian girls are incredibly charming and easy to approach. However, they are always hesitant and prone to second guessing what they really want. There is serious societal pressures. That said, put in a wee bit of investment and anything is possible.

For more info or if you have any questions on Stockholm…

Sex in Georgia by an English teacher living in Georgia.