DO NOT READ: if you are one of those politically correct wankers or have a vagina… or fangs.  This author is not Anti-Vampire or culturally insensitive, but he does  rock.  He also enjoys spicy food, and has a thing for alternative chicks.  Now…

What if I told Vampires were REAL?

Would you believe me? 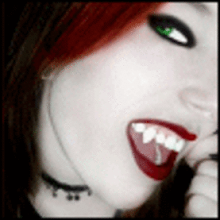 But blood isn’t what they’re after. These vampires thrive on sex for their survival. Sex is used by these wicked temptresses as validation to make up for the love Daddy didn’t give them.

And guess what? – You could be that validation!

Real vampires are originally Slavic not Romanian (deriving from the serbian word vampir) and find their origins in the depths of Eastern Europe and parts of the Balkans.  Ideally they have pale complexions, slim bodies and hypnotic eyes. Many vampires are bi-sexual.

Female vampires are a rare and kinky breed. Few men have slain one.

Of course by slay I mean had sex with.  And by kinky I mean HOLY SHIT!

My slayer story is for another post, but I hope this guide will help you get your own damp vamp!

CAUTION:  Hunting vampires is only for the most dedicated and daring.

You need to actually GO to Eastern Europe or the Balkans.  The best hunting ground is in Ukraine, home to the most beautiful women in Europe. Russian visas are a pain and Transylvanian vampires are usually wrote-off Romanian wannabes. Because there are a RIDICLOUS amount of stunning women in Ukraine, many girls turn vamp to give themselves an edge.

Vampires are rarely seen. Get online and message some vampires to arrange dates before you go over.  Browse the social networking sites. Ukrainian/Moldavian/Belorussian girls  are more than happy to go out with a western guy. Vampires are no different. Trust me, I’ve met girls from all these countries.  Learning a few words of Russian will increase you chances of success by 300%.

Generally in  Slavic nations, the man ALWAYS pays for drinks. Some, more worldly Slavs understand you’re a westerner and will offer to split the bill but bear in mind it is NOT common in these countries. Vampire exude sexuality and can at first seem intimidating. Play it cool, and after a few drinks  they will be biting you, sucking your neck and sticking their tongue in your ear.  It time for the slay. Take them home for the most kinky, beastly night of your life.

I hope you’ve had fun with this guide . Feel free to rate this article and leave comments!

14 Responses to How to Slay a Vampire ;)