“The Way of Men is the Way of the Gang,” as Jack Donovan put it in his latest book, arguing that gangsterism is the milk of unfettered masculinity. One of the books main tenets is that men are most comfortable when they are members of a small band of men. It’s true, too. No man is an island. Nor is he an emotionless node whose sole purpose is to serve humanity. He is a social primate who prefers the company of small groups of friends.

What’s the difference between a gang and a crew?

Nada, but for the purposes of this post, a crew refers to an itinerant gang: a bunch of lads travelling together, hell-bent on hedonism.

I appreciate guys who regularly venture out on their lonesome to travel, party and game. I never go out alone at home, but when I’m travelling solo in a strange country I have little choice. There are advantages of solo travel vs buddy travel. It can be the most rewarding experience in the world. It’s not always easy or fun, but you’re more flexible and make no compromises. I still do solo trips, but personally, I’m in my element rolling with a crew of 3+. There is a several reasons why I prefer it, but the main reason is simply because it’s way more fun.

In the past, I’ve often gotten emails saying…

I want to travel, I really do, but none of my friends are on the same wavelength. They just want to spend two weeks in a resort in Touristville. They’re convinced that Asia/Africa/wherever is an undeveloped shithole. How do I convince them to join me on a real adventure?

Sadly for a lot of dudes, sometimes it’s hard to find like-minded guys who are willing to hit the road with you. So what’s one to do?

Option A: Go anyway. If you spent your whole life waiting for other people you’d go nowhere. Fuck Touristville with the lads, grow some balls and roll solo to Crapistan or wherever you were planning – you’ll have a better time.

Option B: Start a crew.

Starting a crew in 3 steps

Find reasonably priced flights and pick good locations using this technique. After that, float the idea to friends, baiting them before mentioning the cheap price to seal the deal. Tell them about the sexy women, the cheap beer and tales of adventure. Make it sound so good they’d be stupid not to go.

Here ‘s an example from Ernest Shackleton in his quest to reach the South Pole. 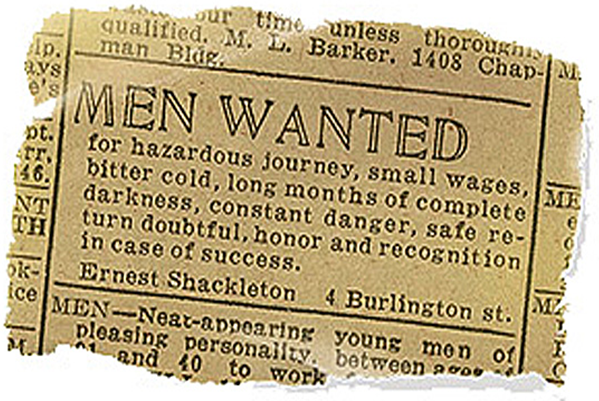 Seriously, who could resist that? OK, bad example. Here’s another from Cartman recruiting his Somali Pirate crew.

Avast there, mateys! Do ya have a thirst for adventure on the high seas of life?  Arrre you sick and tired of your parents and teachers telling you what to do all the time? Then join Captain Cartman’s Perfect Pirate Club, arrrr! Just imagine it, me hearties! A life without rules, without homework and chores! You can live the pirate’s life in Somalia, me friends! Even Kyle said so!

So you have your recruits and you’ve booked flights…now what? Crews, clans, gangs and tribes – they all need a name and a coats of arms. You need a theme. When you cruise into a bar, you want chicks to be wondering, ‘Who the hell of these guys?’ Me and my crew dress like Jedi/Mexican pirates. We have props, theme songs and dances. Women love us. They want to join our tribe. They want to belong. They want our dicks. Don’t be the other bunch of boring dudes looking on in befuddled amazement.

The Rock Solid crew (Krauser, Strangelove and the lads) have f-town.

The VOV duo got the van.

Alibaba had his 40 thieves.

What’s your crew’s ‘thing’? A handshake? A funny dance? Do you cruise in suits? Do you wear fetching hats? Are you Vikings? Rockers? Gladiators? Gangsters? Cavemen?

Sounds extreme, I know, but doing this kind of extreme peacocking can make the biggest shitholes on the planet seem fun. And in tourists town with lots of male competition? – You’ll be the ones attracting the most female attention.

You had a blast on your adventure with the lads? Now make it a tradition. When I announce a Siege, all my mates jump at the  chance. Now each siege feels like a badge of honour amongst our group. They know what to expect on a ‘siege’. We frame sieges as rituals and the most important aspect of our culture.

Even if it’s only two weeks, make it a tradition to go away with your guy friends every year. It will be one the most rewarding things you’ll ever do. Even if you get hitched, the tradition to be so strong that even your other half will understand it.

And remember the golden rule: what goes on tour, stays on tour 😉

How do you roll when you travel?

Return of the Mac ♪
The Shazam Wing Gambit

12 Responses to How to Assemble a Crew