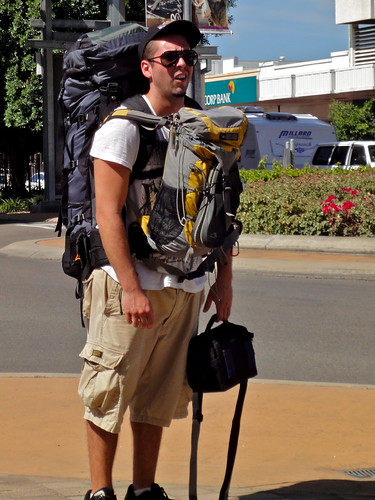 Budget travel means different things to different people. We have the bums, the backpackers, the flashpackers, the location independents, and then the idiots like me who spend 50% + of their budget on booze (an Irish budget).

The Bum: Bare Minimum. His clothes smell like cat piss. Always nicks the hostel soap and will use your deodorant when you’re not in the room. Occasionally steals a t-shirt. May  carry a knife.

The Backpacker: The basics: clothes, toiletries, guide book. Anything else their mammys reminded them to pack.

The Location independent: Carry their whole lives on their back.

The Irish: Wakes up with a hangover and just about remembers to pack his passport. Ends up buying half the stuff he forgot at the airport or while away.

The Bum: Couchsurfing, camping, cheapest dorms in town. Won’t stay in a city with no cheap options. On several occasions has considered sleeping on the street.

The Backpacker: Mainly Dorms, may pay a bit extra for location.

The Flashpacker: Private rooms. Occasionally a hotel if they don’t want to mix with the proles.

The Irish: The gutter, nightclub toilet, or a penthouse suite at the Hilton. Not knowing how they got there in the first place.

The Bum: Reluctantly visits the must-sees. May fast the next day as a result. Takes free tours and doesn’t tip.

The Backpacker: Does the must sees. Occasionally splurges on an adrenaline rush like bungee jumping. Chickens out.

The Flashpacker: No expenses spared. Goes on safari and takes the premium package. Hires a private car to bring to them the really out of the way stuff. Smugly tells you all about it later while showing you the pictures on his 1 million zoom camera.

The Location-Independent: Not pushed. Knows they can do it anytime. Ends up not doing it.

The Irish: Mainly nocturnal and does just enough to relief the guilt. Eventually does the must-sees, but hungover and tends not the appreciate them. Considers the local bar as the main tourist attraction.

The Bum: Avoids going out. When eventually dragged out by others at the hostel, nurses one beer all night. May steal drinks.

The Backpacker: Gets a few cheap beers before they go out. Cautious not to overspend while out. Might not enter nightclub if entry fee is too high. Often thinks about getting a hip flash, but never gets around to it.

The Flashpacker: Wine at dinner followed by cocktails. Has no problem with entry fees. Gets taxis home even when its only a 10 minute walk.

The Irish: Drinking starts at at breakfast. No expenses spared. Starts rounds, much to everyone’s annoyance. Won’t stop drinking until either bar closes, they can’t stand or they pick up. If they do pick up, they’re dick might not share their enthusiasm.

The Bum: Hitches. Uses the local transport. Finds the cheapest possible way around. Will walk for two hours from the bus stations to the hostel if it could save them money.

The Backpacker: Uses local transport, occasionally opting for the express bus or the one with air con. May book a flight or two if they need to make up time.

The Irish: Misses the bus.

The Bum: Beans and toast. Shops at the local supermarket and cooks in hostel. May resort from stealing your food from the fridge. Occasionally splashes out on street food. Their idea of a restaurant is a bus station burger joint.

The Backpacker: Pizza. Cooks in hostel the odd time, but usually grabs a bite around the corner.

The Flashpackers: Steak. Restaurants every night. Not afraid to splurge.  After an expensive lunch in the touristy area, it’s down to the coffee shop for frappucinos and artisan cupcakes with golden sprinkles.

The Location Independant: Cooks at their place, may go out the odd time. Occasionally wonders into McDonalds for some home comforts, then feels like crap because he re-discovers how shit the food is.

The Irish: Doner kebab. Eats barely anything during the day to save money for booze. Ends up at on the take away at 3am anyway, sauce dripping on shirt. Considers a few pints a legitimate meal.

What kind of traveller are you? How’s your budget?