By Mark Zolo on September 21, 2017 in Canada, City Guides, North America, The Americas 4

Snapshots are mini city guides for smaller places or cities I have only experienced briefly. Here’s a little snapshot of Toronto.

Toronto has a bad reputation in the manosphere. Roosh V called it the worst city in North America for single men. While I tend to agree with Roosh’s analyses, I personally loved Toronto.

Sure, it doesn’t have the quality females of Montreal, or the charm of Quebec or Ottawa, Yes, the bars have long lines and they close at 2 a.m, the infrastructure is terrible, and SJW culture is rife—but all in all I think the pros outweigh the cons.

The people are friendlier than in Quebec, the women are high in openness, and the city itself feels like one giant Brooklyn, with a grimy low-rise residential vibe and lots of cool hipster venues. The most diverse city in the world, Toronto is a smorgasbord of women, food, and nightlife. It’s not as wild as New York City, but it’s comparable.

Maybe I’m bias because I was there in summer. I’m also bias towards North America in general (on account of women liking my Irish accent there), but still, out of all the cities I visited in Canada, Toronto would be still be my number 1 choice if I was to move there. If you’re just choosing a city for a weekend, however, Montreal is a better choice.

It may not be for everybody, but it’s certainly gets my seal of approval. I wouldn’t come here looking for a wife, but if you just want to get laid and have fun I’d recommend it.

Girls in Toronto are similar to what you’d expect in any major North American city. They are diverse ethnically, but uniform in attitude.

They tend to be very liberal and open sexually. This is good for getting laid, but it also means you encounter more masculine behaviour.

One symptom is that girls in Toronto put less effort into their appearance than their Francophone counterparts, and as such they are less attractive. Some of them can also be quite rude, and cockblocking is rife here.

In general, however, I found the majority of girls extremely friendly and open to approaching… at least more so than in NYC and Europe.

The most interesting thing about girls in Toronto is the diversity. Nearly half of Toronto’s population is foreign-born. Most of theses of European, but you’ll still find girls from every country under the sun. For me that’s a plus, as I could chat with Ethiopians, Russians, and Arabs and have enough words to gain favour.

For more info on gaming checking on this article on How to Get Laid in Toronto.

Firstly, I’d like thank the Toronto RVF crew for showing me around the city.

I found that the best nightlife is southwest of the city center, in areas like King West, college street, and around the University of Toronto.

To warm up there are a couple of cool bars around College street and Kensington Market. Check out Sneaky Dee’s, or better yet, hidden hipster/hip-hop speakeasy Cold Tea. 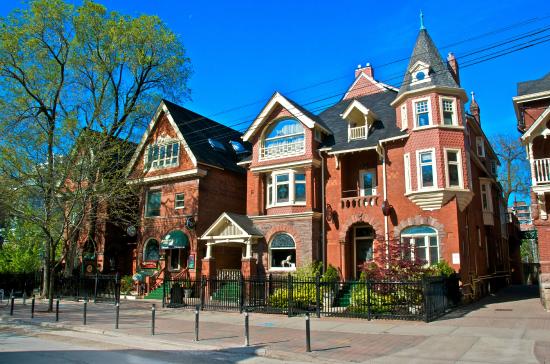 If you’re looking for college chicks check out Gracies on Thursday night and Madison Avenue on the weekend. People shit on Madison, but I thought it was cool and had great volume. It’s three Victorian mansions interconnected with a series of bars. Get there early (the line is INSANE).

If you’re looking for a older, more diverse and sophisticated crowd, The Drake is another institution. On my visit, there were a ton of hot Ethiopian and Eritrean chicks there.

However, I stress that I’m not an expert on the city. Here is more info:

Try to go in summer, and make a day trip Niagara falls.

My number 1 choice if I were to live anywhere in Canada.