Since I started the blog over two years ago, I’ve kept my best stories secret. Until now. It’s nearly here, guys. If the book wasn’t enough, if you buy it this Wednesday, August 1st, you get the following bonuses. 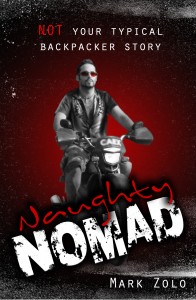 For Wednesday only!  The ebook and Kindle editions are actually priced at $9.99, but you can pick up a copy for just $4.99 on Wednesday. The paperback is priced at $16.99, but this Wednesday, it will be discounted by nearly 30% to around $12 via Amazon.

As featured in this video. I’ve spent months developing this app alone and I have to say I’d delighted with it. I’ll be using it myself. This also will be part of your bonuses this Wednesday!

After Wednesday, the bonuses will disappear and the ebooks will cost $9.99. If you buy the book on Amazon, forward your receipt to [email protected] to receive your bonuses.

For those of you in the dark, my book, Naughty Nomad: Not your your typical backpacker story, chronicles all my most daring adventures before I started this blog. It’s 95% new content that you’ve never read before. It’s features Antarctica, Cairo to Cape Town, Moscow to Manila and every country in South East Asia. And it’s scary stuff: Drug smuggling, sex, war, the works!

I know this book will inspire you to seek your own adventures.

The Reviews have already started to trickle in…

In a world where many people’s lack of adventurous spirit and bovine existence means that they don’t even have a passport, this guy is a modern day pioneering spirit and the stories of his adventures are a breath of fresh air. Some people just have it in their blood I guess.

You know what? Screw fly-on-the-wall reality shows focused on self-entitled, zero talent, zero personalities like the Kardasian’s and Paris Hiltons of the world. Somebody film this guy!

That’s a reality show that would be worth watching!

I first heard of Mark Zolo from his blog called Naughty Nomad which detailed mad adventures in far flung lands including African and Middle-Eastern wars zones, partying hard and sweeping the local women off their feet whilst dressed as a Mexican pirate if you can believe it.

Who the hell goes on holiday to war zones dressed as a Mexican pirate? Yes Naughty Nomad, that’s who and you know what? If he was born a few hundred years earlier, a real pirate is probably what he would be.

This book details his pre-pirate formative years during his teens and early twenties when he traveled so extensively he managed to fill up every page of his first passport in record time.

As the sub-title of the book suggests however, he did not do it in typical backpacker fashion by lounging on the beaches of Ibiza, boozing it up on some Essex-in-the-med type Greek island or locking himself in a Khao San Road fleapit hostel for weeks at a time only to leave the hostel to watch American sitcoms at the bar around the corner.

There is everything here from battling the wrath of Poseidon in Antarctica to sneaking his way out of a Thai hospital following a bad motorbike accident in brutal determination to make a date with a sultry local girl to an attempted murder in Cambodia and those are just the first 30 pages.

the rest of the book a pleasure to read. Everything from living on a marijuana farm with a sex mad, bisexual Cambodian girl who was actually even crazier than the author to illegal border jumps, routine hash smuggling and AIDS scares in Africa.

From Cairo to Cape Town, from Moscow to Manila and beyond.

7 Responses to Book comes out Wednesday with Bonuses