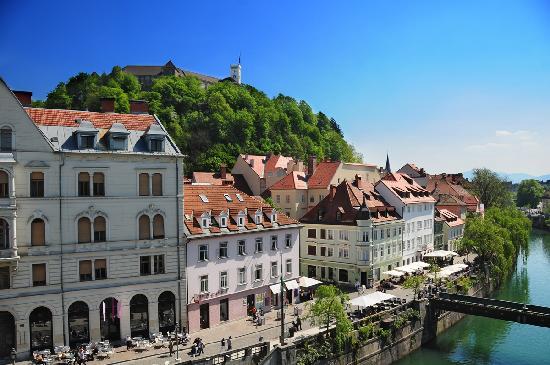 Ljubljana in a word: Funktastic.

Funktastic. Yes. My English is clearly shit, because I couldn’t come up with a better word that aptly describes this small, but dynamic capital. On one hand, Ljubljana has a quaint medieval town feel. It has a castle on the hill, a nice square, and is snaked by a little river with ornate bridges and weeping willows on its banks. But take a five-minute walk and you’re in Metelkova: a wacky hippie commune that looks like it came right out of a cyberpunk novel. Overall, it’s a relatively chilled city, but definitely worth hanging out in for a few days.

Appearance: Slovenians are attractive. The five of us on the trip came to a consensus:  they beat the Croats, but they’re still not a patch on the Serbs. According to recent data, Slovenian women are also the tallest in the Balkans, with an average female height of 1.674 m (5 ft 6 in). Slovenes are the most northern Slavic groups in the Balkans and thus have a little Austria-Hungarian and Italian influence in their blood. Most women are brunettes, however, you see more natural blondes here than in other parts of the Balkans. In terms of dress, I also couldn’t help but notice a little more skin on show here compared to Zagreb.

Demographics: 83% of the population are ethnic Slovenes. The rest mostly come from former Yugoslavia; the biggest groups are Bosnians, Serbs, and Croats.

Attitudes: Slovenians are generally a friendly bunch and I found the women to be pretty receptive to approaching. English was common and they lack some of the bitchy attitude you can find elsewhere in the Balkans. Slovenia was the first Balkan country to join the EU and the city feels more West than East. In fact, the locals will tell for that Slovenia is a Western country. I found Slovenian girls relatively laid back, and I hasten to say, they might be the easiest girls in the Balkans.

Gaming Strategy: Whilst the girls are chilled, the hardest part is finding them in numbers. Ljubljana is a small, student city. The time of of year you travel will greatly impact your results and experience. Day game in the main square. Another source also recommends the BTC mall. If you’re only in town a short time, your best bet to meeting a loose wench is in Metelkova at nighttime.

Accommodation: Accommodation in Ljubljana is not cheap compared to other Balkan cities, so be prepared to splurge a little. Even a dorm will can cost you $30+. If you’re only two people, expect to drop $50+ a night for an apartment. You can nearly double that if you’re travelling solo. Check out Central Apartments for listings. If you’re travelling in a group, I recommend Apartment Anton. It’s class.

Alternatively, I recommend staying in the Hostel Celica. This former prison is one of the coolest hostels in Europe— and it’s actually IN Metelkova, so your location couldn’t be better. I’m not 100% on their guest policy, but if worst comes to worst, the hostel houses a dungeon you could sneak chicks down to. Just bring some candles.

Getting High: In Metelkova, there are loads of people smoking it. Head to the playground and just follow your nose.  Good stuff is around €10 per gram. For more information, check out this webehigh article.

Nightlife options are a little limited in the city, but it’s not lacking in character.

This disco is a reliable go-to spot for students in Ljubljana. Downstairs, it has rock/horror decor and plays commercial music. It’s gets busy from Thursday in summers.  Upstairs at the entrance is a small seating smoking area, which is pretty OK for striking up conversation. The quality of women here is better than Metelkova. Facebook here.

Housing a handful of dive bars, Metelkova is basically a walled compound that was  taken over by squatters, rockers, hippies and hipsters. It’s full of mad art works, madder venues, and it even has a giant tree house/ jungle gym in the middle where everybody goes to drink from their own bottles and smoke weed. It’s a pretty cool place to mingle and meet to new people (when it’s busy). It also attracts the loosest chicas in the city. Have fun! 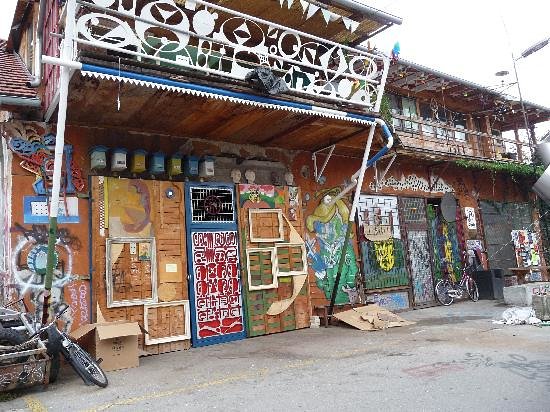 One of Metelkova’s many colourful buildings.

Ljubljana was my favorite city on our last Balkan jaunt. That’s saying a lot, especially when you consider we were only there for two nights—and midweek during summer vacation! I could have easily hung out there for a few weeks. Options were very limited at night, but the first night I bedded a very tasty Slovenian hipster from Metelkova. The second night only one of us pulled, while the rest of us went a little overboard on the beer and cocktails, got gee-eyed, and ended the night crawling on all fours. It was the second night of the trip I couldn’t remember how it ended. You’d think I’d learn by now. Five lads doing rounds is a recipe for disaster. Anyway, I hope to be back in this charming little city.

MiXX, a 30-something American of Latin decent, had this to say…

Slovenia is a tough cookie to crack, women will first come off as cold, shy or distant. Keep in mind women are NOT used to guys approaching them except at a local nightclub. Most were freaked out by my approach. Also, they are very insecure about their English skills and would rather shut you down, than try to talk to you – so, immediately compliment them on their English abilities to avoid a girl coming off as cold when she is just shy.

Slovenia will not disappoint with its very sexy, and beautiful young women just as curious about you, as you are about them….take a risk and visit…the women are waiting.

Slovenia Discussion Thread on the Forum

My Slovenian Nightclub Experience by Ciaran at Wayofaplayer.com

The Naughty Nomad Show – Episode 4
No.1 Resource for Male Travellers