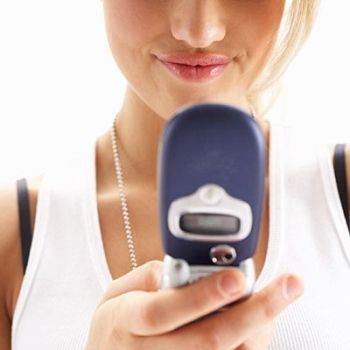 1. When to send the first text

There a bit of debate about this.

Personally, I think the ‘three day rule’ is bollocks. You want to be fresh in a girl’s mind. Beautiful women exchange numbers like soup at a homeless shelter. It’s an ego thing.  The next day or two days after is fine. You want to go from meet to bang as soon as you can—or “limit the time bridge” in PUA speak.

I usually send a text the next evening. Texting in the morning  portrays neediness and everyone’s cortisol levels are high and causing stress. Early evening is better than late at night, too, because it leaves a slight chance of casual meet-up that night without giving her time to flake.

EXCEPTION: If you meet her Friday, I wouldn’t text her Saturday and wait until Sunday or Monday.

As another caveat to this, don’t text her if you can’t meet up within the next two to three days. You’ll create a awkward lag period and increase the likelihood she’ll flake.

2. Idea for the first text: Facebounce

This is a great idea for the first text. Especially if  suspect she might not text back.

“Hey it’s Mark 😉 It was nice meeting you last night. My facebook is facebook.com/xxxx. Add me…”

Sometimes women don’t respond to the first text. A good looking chick could have given her number to half a dozen guys on a night out. She could have been black-out drunk, too. Mind you, ideally you should always go for at least a make out on the meet-up, but sometimes that’s just not possible (especially in some conservative countries).

This text is great because…

a) It doesn’t require a response and is totally not-needy.

b) She can log on to check you out before contacting you back. “Oh yeah, that guy! He was cute!”

You have an awesome profiler and timeline banner showing you wrestling a bear, right?

If not, sort that shit out. Your facebook profile is like a shop window. Nobody is going to go inside if the window dressing isn’t alluring.

c) It gets her chasing a little. She has to add you or initiate the conversation.

This is pretty self-explanatory.

Don’t blab on and certainly don’t write more than she does. Light-hearted one-liners show a cool, aloof attitude. This is not gospel, but keep it in mind. If she responds with longer messages, you have more liberality to mimic the behavior.

When she agrees to meet up, a simple “Cool.” will do.

4. Limit txt-speak and watch your spelling

I know this is rich coming from someone who never proofreads his posts, but nevertheless…

This is not acceptable for an intelligent man of the world like yourself. Using txt-speak makes it sound like there’s an unintelligibly sheep at the other end of the line. Have some standards and show you’re smart. Things like “btw” and “u” are fine if you’re in a rush, but don’t go overboard.

Also: For the love of Apollo, use capital letters at the start of sentences and “I” not “i” when referring to yourself! Nothing looks worse than “i like this. i like that.” It makes you look like a four-year-old.

Exclamation marks (and CAPITALS  too) convey too much excitement and neediness. I almost never use them. It’s the same with too many question marks. Instead of always using question marks,  considering using an eppilsis “…”

Example: “What you doing tonight…”

It’s a lot more laid back.

6. Limit emoticons and use them properly

If she doesn’t use them, you shouldn’t either.

Also, as a rule, you should at limit emoticons to one-per-text maximum (and even that’s too much).

Personally, I don’t send more than one emoticon every three texts. And other times, I avoid them all together.

Here are some emoticons I favour:

The classic smiley face. I’m not really a big fan. I really only use this when I first text to show warmth and friendliness to girls who a little more conservative.

Ah yes, the classic cheeky winky – a personal favourite. It’s a little bit naughty. It’s a good way to wrap up a text conversation. For me, this says “You’re getting it.”

The sticky-out tongue is quite versatile. It can mean “only kidding” (a good alternative to ‘lol’ or ‘haha’), a playful “screw you” or “I’m drooling on the floor right now. When I get hold of you, I going to tear your clothes  off and ravish your vagina.”

7. When asking a girl out, don’t ask questions, make statements.

This is classic alpha tact. You must be perceived to be in control. Some examples…

Alternatively, give the illusion of making statements. Going back to what I said about question marks, employ “…”. It implies your making assumptions, not asking questions…

8. Give her the illusion of choice

Instead of asking her a simple yes or no question, give her a choice of two things and sub-consciously build “a yes ladder” before asking her out (via a statement, of course).

Everyone likes chocolate. 95% of the time she’ll say yes.

See what I’m doing? She’s getting caught in my web of trickery! Mwahaha.

Text 3 (the hook): “Hmm…well then, we should have a wine and chocolate night. I’m free Tuesday or Thursday…”

Game. Set. Match. I’ve often used this technique to invite girls back to my place for the very first date. It’s golden.

9. Be untimely with your responses

You know when a girl you like doesn’t text you back for hours? or even waits until the next day? Doesn’t that drive you crazy?

Well guess what? It’s the same for chicks. I purposely don’t text back for ages. If she waits an hour to text back, wait two hours to text her back. If she responded quickly to that text, you may do the same. If she waits a day, a good five hours will do it. Keep her in line and punish negative behaviour.

Sometimes, if it’s some really stupid text, don’t text back at all.

10. Dealing with lag-time and texting to confirm the date

So, you’ve followed all my advice and hopefully you’ve got a hot date tonight. Naturally, you’ll want to confirm she’s coming and you might be tempted to text her saying something like, “Still on for tonight?” or some lame shit like that.

Instead, you should have a reason to text her. Here’s the proper way to do it:

Keep her it the dark until the day of the date. That means that you don’t confirm all the details (ie. exact time and place) in  the initial round of text . Tell her you that you’ll text on the day and let’s her know what’s up. That way, when the day of the date rolls around, you can text her saying something like,

“Hey 😉 I almost forgot about you. I’m busy until 7 but I could meet you around 9ish. Sound good…”

I hope this guide help you guys. If you have any of your own tips on Text Game, feel free to share them by commenting below!

If you have questions, you can ask me via the forum.

Other Resources on Text Game:

The Re-start Text by Roosh V

An Analysis of Text Game by Heartiste

19 Responses to 10 Tips for Texting Girls