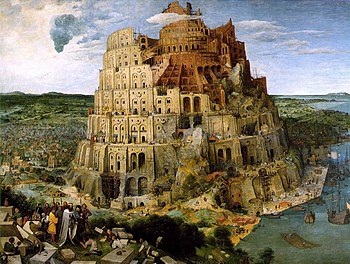 The Tower of Babel was an enormous tower built in ancient Mesopatamia (mordern day Iraq). According to the biblical myths, the survivors of Great Flood, speaking one language, went on to build the city of Babylon  with the Tower of Babel at it’s centre. They all lived happy ever after.

That was until the old testament God, Yahweh, being the evil prick he was, decided everyone speaking one language was a stupid idea and decided scatter the Babylonians across the Earth and mix up their languages up for the lolz. T’was the confusion of tongues.

That’s why we have Spanish class – duh!

Creationist nonsense aside, the word Babel is now synonymous with multilingualism.

Recently, Roosh started a thread on his forum asking guys: Are you a Polyglot Player? (A Polyglot is someone who knows several languages.)

He then defined what he called the Language Notch:

This is banging a girl from macking in a foreign language. It’s the hardest metric to attain because you need to learn a new language and then adapt your game to it.

I liked this idea, as me and my crew have always been polyglot players, or  Babylonians as we say. In Rastafari, the term Babylonians also is also employed for evil-doers (like pirates, argh!).

Anyway, whatever you want to call yourself, being an international Casanova who’s loved in many languages is something to aspire to.

Personally, I have four language notches so far. I’ve already gamed women in English, Spanish, French and Russian – all languages I’ve been able to have conversation in.

Aside from that, I’ve also bedded muchas chicas just from being able to drop a few sentences of their local lingua.

Often, girls melt at your feet if you know even the basics of their language – especially if it’s one most people have never heard of (start speaking Fula to a Guinean and she’ll jump on you faster than bag of rice!)

My signature move is being able to approach a girl, guess where she is from and start speaking her language. It’s powerful.

Becoming a Babylonian/Polyglot player is the best thing I’ve ever done.

Not only does learning a new language give you value, it also gives you a chance to improve your character. You can work on your speech, your tone and eradicate idiosyncrasies. You can become more sexy.

When I speak Russian, I turn into a badass tough guy. My voice gets deeper and my body language gets more macho.

When I speak Spanish, I turn into a Latin lover. I speak slowly and sensually with more passion.

When I speak Chinese… I sound like an idiot – but hey, you can’t make every language sound sexy!

There are a million reasons to learn a language. Just go for it!

What the best way to begin?

Now go forth and multiple!
😉

3 Responses to The Babylonian: Polyglot Players