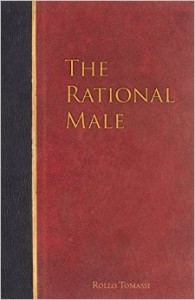 In a sentence: Simply put, all modern men should read this book.

I’ve been reading a lot of works about sexuality and masculinity of late—Sex at Dawn and a Billion Wick Thoughts to name but a few—but getting to the last page of such works has often been a struggle.

Not in this case.

The Rational Male is the ten-year accumulation of writings and ideas from author and blogger Rollo Tomassi. It provides a refreshing take on inter-gender dynamics and male conditioning in modern Western society. Among the topics discussed are the concepts of positive masculinity, the feminine imperative, “plate theory”, and the core psychological theory behind Game awareness and “red pill” ideology.

There are many things I loved about The Rational Male, but first and foremost was the insight provided. The book is deeply introspective and unapologetic in its view of male-female relations, unhampered by the politically correct censorship that would no doubt burden this book if a mainstream publisher got their grubby hands on it. As a staunch advocate of  behaviorism, Rollo leaves little room for lofty idealism or debate in his analyses, and as a result his advice and wisdom seaps into your brain like a dry cum-towel.

With its amoral bluntness, The Rational Male reminds me of Machiavelli’s The Prince, exposing the realpolitik of gender relations.

I also liked Rollo’s writing style, which manages to be both succinct yet descriptive, employing metaphors when needed to re-enforce important points.

If I was to nit-pick, the only slight downside of the book is that much of the material is extracted from his blog. As such, it can sometimes feel like a compilation of long essays rather than one cohesive work. Furthermore, regular readers of Rollo’s site may already be familiar with much of the material.

In sum, it’s been a lot time since I’ve gotten such value from one book. Rollo knows his audience. If you liked Jack Donovan’s The Way of Men, you’ll love this book. I lost count of the amount of “aha” moments I had while digesting it.

If you’re interested, you can pick it up on Amazon here.

For more book ideas, check out my bookshelf.