There’s nothing better than making your own brew. I’ve just finished my first batch of Naughty Nomad ale, and at 6.5%, the stuff is rocket fuel. Stuck in a Sharia country? An expensive country? Want a really cheap way to get hammered? Want the ladies to be all like, ‘OMG, you make your beer? Bring back to your mancave where you can get me drunk and give it to me hard!’ Yes? Well then, I recommend your read this article. So without further adieu…

How to Make Beer

Men from all corners of the globe have tendencies to like the same things, such as boobs, sport, rock music, action-movies, yada yada yada. There is one common affinity that almost all men share and that common partiality is to beer. Whether you’re watching your favourite team or just hanging with a few of the guys, there’s just something manly about enjoying it with a nice cold one. Since the days of the Mesopotamians man has been making beer because, well, why not? It tastes great and it gets you wasted. If you’ve never considered making beer yourself you should ask yourself: why not?

Beer is very easy to make, provided you follow a few simple steps. But first you’ll need the following:

All of the above can be found online at any homebrew delivery company (although I’m sure you can think of a way of acquiring those brown beer bottles yourself). It’s pretty cheap. You can get everything you need to start for under $90. Then once you’ve done it once, it’s cheap as chips to brew all subsequent batches.

Ok, so now you’ll want to know how to make beer. Just follow these easy steps:

You need to thoroughly clean everything that is going to be in contact with you beer to prevent contamination, otherwise in a few weeks you’ll be pouring some undrinkable piss down the drain. You can sterilize your equipment by soaking it in a diluted iodine solution for about 5 minutes.

Boil 4L of water in a large pot. I like to use bottled water but if you’re just not arsed spending the extra money, you can just use tap  water. Add the syrup from the beer kit once the water is boiling and stir for around 15 minutes. I also like to add around 30g of hops at this point to make the beer a little bit bitterer.

Another thing that causes off-flavours is not cooling your wort quickly enough. The easiest way to do this is to freeze about 2L of water in a plastic bottle. Fill a sink with ice, put your pot in the ice, then stir the wort with the freezing cold plastic bottle. Using your thermometer you wanna cool it down to room temperature (around 20°C) in about 30 minutes.

Ok, now it’s time for the magic. You should prime your yeast by initially adding the dried yeast to 3-4 cups of warm water for about 30 minutes, to warm them up for their big job ahead. Pour your wort into your large fermentation bucket and top it up with 18L of water. Add your yeast, cover the airlock hole (I use the bung and saran wrap) and shake the shit outta your bucket for about 5 minutes, just to mix the yeast around evenly and wake them up a bit. Next take a small sample, and measure the original gravity using the graduated cylinder and hydrometer. After this, cover your bucket with its lid, insert the airlock and leave it alone for around three weeks. It should start bubbling over the next couple of days; this is the yeast turning lame sugar into awesome booze. 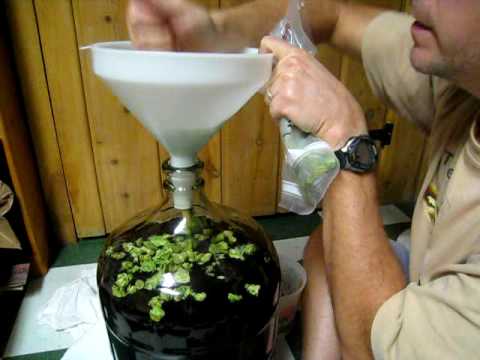 I’ve started doing this and it makes all the difference to the final flavour of the beer. After about 5-6 days get a mesh bag, put about 30g of hops into it, throw it in with your beer, and leave it as normal. This is not necessary but will make a huge difference when your beer’s finished.

Ok, so it’s down to the last major process in the beer making, bottling time. First using the graduated cylinder and hydrometer, take the final gravity of your beer. Using your original gravity, your final gravity and this chart, you can figure out the strength of your beer. Your bottles and beer caps need to be sanitized now, as this is another common contamination point. You also need to boil ¾ of a cup of corn syrup to 3 cups of boiling water for about 5 minutes to carbonate your beer. Cool this solution and add it to your beer, mix gently, and leave it settle for 30 minutes.

Then it’s bottling time. Fill each bottle, leaving about ¾ inch space from the brim. Cap the bottles and leave them for at least 2 weeks at room temperature. Generally speaking, the longer you leave them, the better the beerwill be.

Stick a few cold ones in the fridge, pour into your favourite glass, and enjoy your homemade deliciousness. For a more in depth analysis on every aspect of the beer making process I highly recommend you check out this site:

The Shazam Wing Gambit
Only in India

3 Responses to 5 Steps to Making Your Own Beer